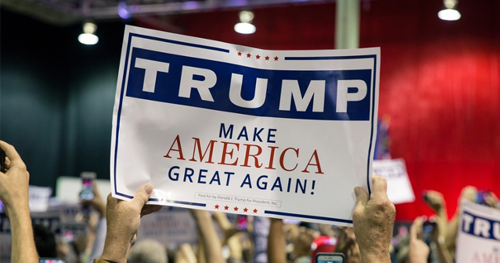 Disclaimer: This blog is not an endorsement of Donald Trump. It is not a politically driven blog. This blog is not meant to offend or to incite. It is simply a blog about the power of good marketing.

Donald Trump is a businessman. You do not become a successful businessperson and branding expert without a deep understanding of marketing.

More than one year ago, Trump’s campaign was a farce. Today, it is one of the most astonishing, remarkable presidential campaigns in history.

For many, his victory has been shocking, mind-numbing and even heartbreaking. For others, it has presented a sense of hope and change.

Political scientists will be scratching their heads for years to come. Marketers, on the other hand, shouldn’t be too stunned.

The Trump campaign was a marketing masterpiece (cue the tomatoes and death threats). A real estate tycoon, reality TV star and a political neophyte defeated an astute opponent who for years has been primed for the presidency. This was his first rodeo, and he rode away with the highest prize.

Here are six key strategies marketers can take away from the Trump campaign.

6 Reasons Trump's Campaign Was A Success

1. Trump’s message was simple and clear.

Everyone, whether you love him or hate him, know the slogan. Don’t make me say it…

What was Hillary’s? Love Trumps Hate? #ImWithHer? Stronger Together? Which one is it? These are all strong messages, but they got lost.

In addition, Trump's message wasn’t confusing. It wasn’t complicated. Heck, it wasn’t even clever like Love Trumps Hate. But it was loud, clear and everywhere.

Rather than focusing on foreign trade, which is frankly above many of our IQs, Trump targeted the majority of people’s pain points, such as the outsourcing of jobs to other countries, and the safety and security of our citizens. The average family doesn’t gather around the dinner table to discuss international trade and to debate our country’s infrastructure and tax system. They talk about their jobs and their loved ones.

Raise your hand if someone speaking about international trade gives you a tingly feeling inside.


What about when someone declares they will take back our jobs from China and vows to protect our people from terrorists? You get a tingly feeling inside. And when Trump did talk about international trade, he always made sure to bring that topic back to supporting the American worker.

Most human beings can understand or at least sympathize with job loss. And everyone wants to shield their loved ones from harm. Trump exploited those common fears and built his campaign around easing them.

4. Trump called on the people.

Trump made the people the heroes of his campaign. He didn't say “Let Me Make America Great Again.” He consistently said “Let Us.” He petitioned the people, inviting them to be a part of the solution.

Yes, Clinton’s “Stronger Together” evoked unity and inclusion, but it lacked a call to action.

5. Trump gave the people a plan.

Whether or not I agree with Trump’s plan is moot and whether or not he delivers on his promises is too soon to tell. But he presented people with one clear plan. He swore to shake up Washington, to bring back our jobs, and to build a wall.

6. Trump showed the people the future.

Trump pledged to restore the American Dream and to fight for our constitutional rights. He said Clinton would destroy our country and abolish our rights.

You can lambast Trump for being a liar, a racist, a misogynist, a homophobe and a xenophobe, but one thing you can’t accuse him of is being a poor marketer.