ROI Tried Suite Escape (And It Was Awesome) 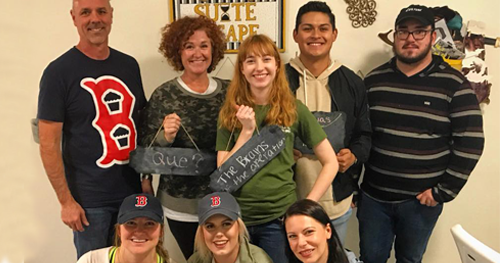 One really great way to get to know all of your coworkers is to get trapped in a room together for an hour.

Which is what all of us at ROI found out when we were locked inside an escape room at Suite Escape, an Amarillo escape game company, on October 5.

We’re always up for an adventure, so when we won a free team-building exercise at Suite Escape, we jumped on the opportunity. I mean, how often do you get the chance to find out who you should side with if you get abducted by the Jigsaw Killer? (The answer is Carlos, by the way.)

This experiment was also an excellent opportunity to see everyone’s strengths and the unique ways we approach the same problems.

Damian from Suite Escape evaluated each of our performances. Here’s what we found out:

Carlos really shined. He took charge, leading the way through puzzle after puzzle. If we ever started going down rabbit holes, he’d bring us right back on task. He’s sharp, so he helped us break down even the most complex puzzles.

“Mr. Confidence,” Damian said in his evaluation of our team. “This guy isn’t afraid to voice his ideas off the top of his head, and that’s a good thing. He knows what he’s good at, and if you put that in front of him, he’ll prove it.”

Rachel, our office hero, ended up being the ultimate helper. She kept track of where things were, wrote down every coded message, and brought over clues to whoever needed them.

“She’s very good at keeping track of everything and keeping things going,” Damian said. “She doesn’t miss much in organization. Her tendency is towards getting things done, because that’s her job.”

Zach was the first to notice a crucial out-of-the-box visual clue. Not too surprising, considering his eye for design.

“He’s a team player, but he likes his space,” Damian noted. “He can work with anyone to a point. That point is what task he’s been assigned. Don’t distract him. He’s got this.”

Gabe helped to find visual clues, spotting them even in the most obscure locations. She was the ringleader on several projects, teaming up with Zach and Sammi.

“Gabe is a powerhouse,” Damian said. “She’s able to dig in and is not shy about how things should go.”

Sammi also provided a lot of support, working alongside other groups to ensure every task was handled. Makes sense, considering her ability to herd all of our meetings and keep our team on track as a project manager. She worked with Gabe and Zach, and together they solved the first puzzle of the hour.

“She’s able to multitask different projects and support the bridges between them,” Damian observed. “If you can get her comfortable, she’s rock solid and quite funny.”

Ashley observed the puzzles, taking mental notes on how to proceed, but also offered great insights. She was able to identify patterns, using her matching skills to bring similarities to light. Her feedback helped us solve one of the biggest puzzles. Perhaps her ability to notice patterns relates to her keen eye for fashion.

“Her thought process is foreign to the team, but she’s able to see all the pieces and configuration,” Damian pointed out. “It might not solve the problem, but it will allow the rest of the team to see new ways to approach it. She’s quiet but cunning: the most dangerous person (to the puzzles) in the room.”

Steve shined most when it came to noticing things that didn’t look right. If an object seemed to have a unique design, if there was an outline that looked out of place, he was the one to find it. And everything he found ended up being pieces of the larger puzzle, leading to our success.

“He’s a hands-on guy,” Damian observed. “Literally. He’s very tactile. He will test everything to its limits to know if it’s viable. Will it hold up? Will it function at 120%? He’ll find out.”

I can’t say how I acted objectively, only that I had a complete blast. I love puzzles, so to say I got into it would be a bit of an understatement. I may have jumped up and down a little too much. But hey, solving problems is exciting! I teamed up with Carlos, and we were able to dominate some of the toughest challenges.

“Ferocious about details, she tends to over-focus on the little things,” Damian said. “There may be a forest there, but all those darn trees are going to be in the way.”

As a team, we solved the problem in just under an hour. Not too shabby for escape room virgins!

I think the reason we were able to complete it in an hour is because we worked together, separately. We branched off into different groups. Each of our groups tackled disparate projects simultaneously, allowing us to solve each of the problems at a quicker time. Had we all tried to focus on one puzzle at a time, we might’ve never made it out of the room.

This relates a lot to the work we do at ROI. Although we’re all a team at ROI, we’re broken up into different groups. Each of us belongs to a separate entity, like content or creative, where we work on our own specialty but als collaborate with our coworkers. We’re all marketers, but we have our own domains. And because of that, we’re able to provide high-quality work across the board and get a lot done in less time.

I’m sad that Drew, Jim and Tiffany missed out on the fun, but I’m so thankful we had this experience! I feel like I learned so much about everyone on the team and gained powerful insight into how success works in the bigger picture.

Want to see more of the fun and shenanigans ROI gets up to? Follow us on Instagram!